NATO is nothing more than a machine for the implementation of the US’ global hegemonic will, which both disparages Europe as a whole and runs counter to Europe’s pursuit of independence and autonomy. As long as NATO exists, there will be no day of peace in Europe and in the world.

Is NATO, the biggest promoter of the Russia-Ukraine conflict, in any way qualified to point a finger at China, which has been facilitating dialogue for peace from the very beginning? 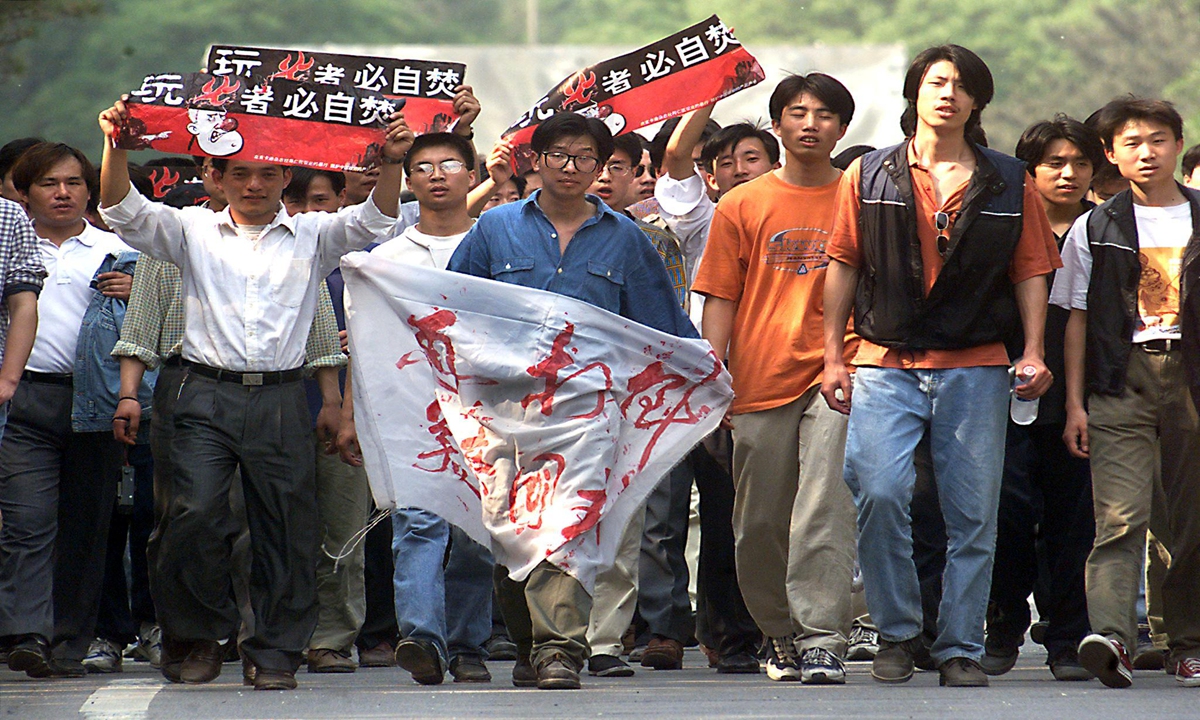 A group of angry students and workers march toward the US embassy in Beijing on May 11, 1999 to protest the killing of three Chinese journalists following NATO’s bombing of the Chinese Embassy in Belgrade, capital of now defunct Republic of Yugoslavia. China repeatedly reminds NATO that it owes blood debt to Chinese people. Photo: AFP

NATO held an emergency summit on Thursday to discuss the Ukraine situation and other issues. Just one day earlier, NATO Secretary-General Jens Stoltenberg said that Western leaders will “spend a significant amount of time talking about China.” He framed China as providing Russia with political support “by spreading blatant lies and disinformation,” and “allies are concerned that China could provide material support for the Russian invasion.” These announcements are basically consistent with the summit statement on Thursday.

When peddling the lies which have confused black and white, Stoltenberg’s face skin might be thicker than the Berlin Wall. Is NATO, the biggest promoter of the Russia-Ukraine conflict, in any way qualified to point a finger at China, which has been facilitating dialogue for peace from the very beginning?

China’s stance on the Ukraine crisis is very clear – starting from the merits of the matter itself, making independent judgment, upholding international laws and the universally recognized basic norms of international relations, insisting on acting in accordance with the UN Charter, and advocating a common, comprehensive, cooperative and sustainable concept of security. Compared with the US and NATO, which have been constantly handing knives to the conflict zone, China’s attitude is truly responsible.

Stoltenberg has kept saying that he hoped to “find a peaceful way to end this war as soon as possible,” yet revealed at the same press conference that there would be “major increases to NATO’s forces in the eastern part of the Alliance.” After the summit, NATO announced that it will provide more military support to Ukraine and that member countries will invest more in defense. Is that NATO’s understanding of “a peaceful way?” The fact is that NATO needs the war more than anyone else.

After the Cold War, the dawn of peace that once appeared in Europe turned into an existential crisis for it. NATO, which should have ended long ago, is relying on the fear on the European continent and deliberately creating crises to prolong its life.

In the face of the Ukraine crisis, most major countries, including India, Brazil, as well as most countries in Africa, Southeast Asia and other regions, have taken an objective and fair position. These countries have almost two-thirds of the world’s population. Their attitude is the mainstream posture of the international community.

But why did Stoltenberg mention only China? Simple as it is: NATO, which has long been considered “brain dead,” needs to find a life-saving ventilator, as relying on the oxygen brought about by creating a “Russophobia” is increasingly insufficient. It fears it will expire at any time without being “intubated.”

This is not the first time that NATO intended to exploit China. Stoltenberg declared last year that NATO would expand its focus to counter a rising China. As a product of the Cold War, NATO pursued exclusive collective security, engaged in bloc politics and camp rivalry, and now it even reduced to a tool for the US to maintain hegemony. NATO repeatedly mentioned China recently, proving that it is nothing more than a machine for the implementation of the US’ global will, which disparages Europe as a whole and runs counter to its pursuit of independence and autonomy, as well as kidnaps Europe’s common security.

Serbian football fans at a recent UEFA Europa League match in Belgrade held up banners listing US/NATO interventions in recent decades to countries including Guatemala, Cuba, Vietnam, Congo, Nicaragua, Iraq, Yugoslavia, Afghanistan, Libya, and Syria. It needs to be emphasized here that the Chinese will never forget May 9, 1999, when the US-led NATO brazenly attacked the Chinese Embassy in Yugoslavia with missiles, resulting in the death of three Chinese journalists and many injuries. NATO still owes a blood debt to the Chinese people!

As long as NATO exists, there will be no day of peace in Europe and in the world. Former CIA director David Petraeus proudly said that the Russia-Ukraine conflict “is to make NATO great again.” However, French President Emmanuel Macron said the conflict gave NATO an electric shock. But he refused to withdraw his “brain dead” comment. Granted, an emergency aid may boost NATO’s heartbeat for a while, but it will never cure the bloc’s severe illness. It would be only daydreaming to seek an elixir of life by manipulating China-related issues.