The Tianwan Nuclear Power Plant, in Lianyungang, East China’s Jiangsu Province, is the largest Chinese Russian joint venture ever, and will become the world’s largest nuclear power plant upon completion. A decade in the making, it will help China reduce greenhouse gas emissions and produce cheaper and safe energy.

Construction of the No.8 unit of the Tianwan Nuclear Power Plant, the last reactor unit of China and Russia’s largest nuclear power cooperative project, is the first domestic nuclear power unit that started construction in 2022.

Tianwan’s No.8 unit is scheduled to be put into operation in 2027, according to the China National Nuclear Corporation (CNNC). 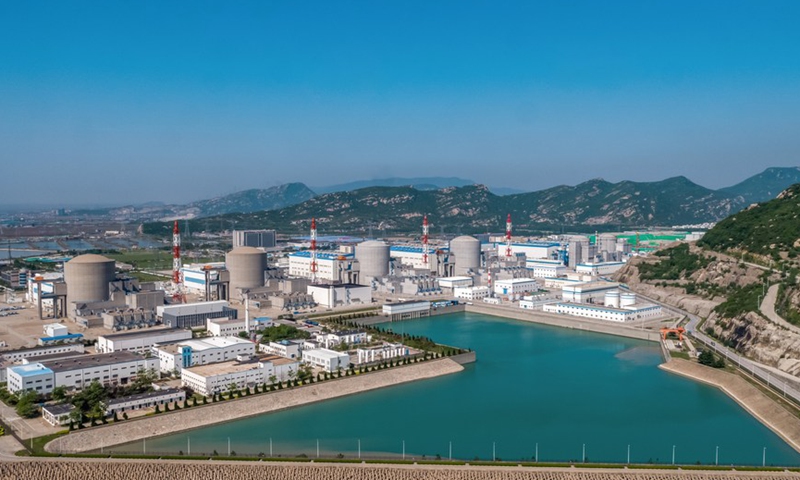 According to CNNC plan, Tianwan nuclear power plant is designed to have 8 million-kilowatt pressurized water reactor (PWR) generating units, with a total capacity of 9 million kilowatts, which are able to generate 70 billion kilowatt-hours of clean electricity annually.

Tianwan Nuclear Power Plant is the largest China-Russia nuclear power cooperation project. The first four units use Russia’s VVER-1000 model. Unit No.7 and No.8 use Russia’s third-generation VVER-1200 model, with a single unit capacity of 1.265 million kilowatts. The No. 5 and No. 6 units adopted China’s independent M310+ PWR nuclear technology of CNNC.

The No.7 and No.8 units will generate 18.8 billion kilowatt hours of electricity annually once put in use, equivalent to reducing carbon dioxide emissions by 15.34 million tons a year.

China and Russia have ratcheted up cooperation in the field of energy, including nuclear energy, such as Tianwan Nuclear Power plant and Xudapu Nuclear Plant in Huludao, Northeast China’s Liaoning Province.

According to the statistics published by the General Administration of Customs, China imported 334.29 billion yuan ($53.4 billion) of energy products from Russia in 2021, up 47.4 percent year-on-year, accounting for 65 percent of the total imports from Russia.

In 2021, China generated 371 billion kilowatt-hours of nuclear electricity, up 1.3 percent year-on-year, according to the National Energy Administration.

By January 1, 2022, China has 53 nuclear power units connected to the power grid, with a total installed capacity of 546.695 million kilowatts, ranking third in the world.

Russia and China first signed a nuclear cooperation agreement in 1990. In 1997 they signed a milestone contract regarding the Tianwan NPP. As defined by the agreement, the Russian side is responsible for technology, the design of the nuclear island and the turbine island as well as the supply of set equipment. The Chinese side is responsible for construction management, construction and supply, partial designing and most of the installation.

Construction work kicked off in October 1999. The two reactors involved in the first phase are Russian AES-91 pressurized water reactors (PWR). The reactors are an improved concept based on the Russian standard reactor type VVER-1000/392 to be in line with internationally proven nuclear and radiation safety standards as well as with China’s relevant regulations and standards on nuclear safety.

Security concerns have long dogged the nuclear industry, and the devastating accidents at Chernobyl in Ukraine and Three Mile Island in the United States are still fresh in the minds of many people. However, the Chinese government has emphasized a commitment to safety.

“Safety is the most important issue for nuclear power plants,” says Shi Ling, deputy director of the maintenance branch of the Jiangsu Nuclear Power Corporation (JNPC), which was established in 1997 to operate the Tianwan plant. “There are international organizations working as nuclear watchdog inspectors. The Tianwan NPP has joined as a member, welcoming their inspections.”

At the Tianwan NPP some advanced measures have been taken to better ensure safe operation. Its reactors have two protective layers, including an internal hermetically sealed cover that prevents radiation leakage into the environment and an external cover to protect it from any environmental impact.

Fifty-five bundles of steel rope help support the prestressed protective layers, which are designed to withstand earthquakes, floods, tornadoes and storms. The reactors were also designed to be protected from falling objects.

“What makes the Tianwan plant unique globally is a reactor trap that can hold and cool the reactor core in the event of a meltdown,” Wu Xiujiang, deputy general manager of the JNPC, recently told China Business Weekly.

“Tianwan is the first in the world to use it.” The trap prevents the reactor core from melting the concrete workshop slab and causing leakage of radioactive material. The Tianwan plant also relies on equipment from Alfa Laval. “We use a total of 46 Alfa Laval gasketed plate heat exchangers in five different models,” says Yan Weifeng, JNPC maintenance engineer.